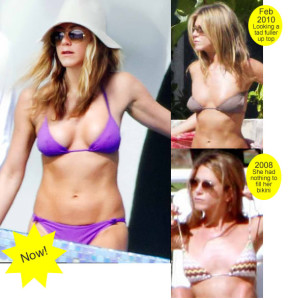 The star comes out of hiding with some serious cleavage!

Peekaboob, we see you Jennifer Aniston! Back in public view, the actress stepped out in her favourite purple bikini, looking more fabulous than ever while flaunting head-turning assets. What a comeback!

As NW had previously reported, rumours were rife Jen has been off radar for a secret cosmetic boost – including what could be her fourth boob job.

“Jen’s been complaining about having wrinkled cleavage from sunbathing. So she wanted her breasts enlarged by one size to make them look firmer on camera,” a friend exclusively reveals.

Mission accomplished! The A-lister was literally busted last week while holidaying at her favourite hot spot, the One&Only resort in Cabo San Lucas, Mexico. Whether her noticeably fuller fun bags are the result of surgery or she’s simply invested in a boosting bikini, 41-year-old Jen gave fellow sunbathers an eyeful as she was snapped happily strutting her rack-tastic headlights.

The Bounty Hunter star was soaking up the Mexican sun with friends, including talk-show host Chelsea Handler. When Jen made an appearance on the 35-yearold’s show Chelsea Lately in August, the two discussed a rumour that they “work out together at Crunch in West Hollywood and then we have vodka-fuelled fiestas”.

Now the friends have gone out of town, it remains to be seen whether they find said men. With a figure this fab, unluckyin- love Jen shouldn’t have any probs!

Jen’s gone from flat to phwoar with what could be several ops in just two years, and last week there was little doubt the star had yet more surgery.

According to Sydney plastic surgeon Dr Laith Barnouti, “It is quite likely she has had a breast augmentation. Ageing breasts tend to loose volume and migrate south. There is a nice fullness and good volume, usually a sign of a boob job.”

“Given that in both pictures she seems to be a similar weight, weight gain could not account for [her larger breasts]. In both shots she’s wearing a triangular bikini which adds nothing to a bust and is a great way of comparing. If she has had a breast augmentation as I suspect, it has been done well. It is a nice and proportionate look for her.”