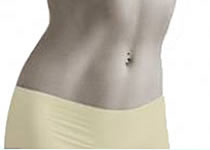 The condition known as ‘middle-aged spread’ occurs as we age. Fat simply accumulates around the male stomach, hips and abdomen. This is extremely hard to shift even with a strict diet and exercise regime. The more there is, or the older you are, the harder it gets.

In severe cases, an apron of skin may hang down over the pubic area. This often causes skin infections in the fold, particularly in hot weather. This is more common following extensive weight loss.

Usually, the best way to get on top of the issue is with liposuction, a procedure which is simple and safe when done by an experienced practitioner.

Abdominoplasty is the surgery that removes this excess skin and is a highly effective treatment that can produce great-looking results. However, it is not simple and does come with some potential complications. We are always up front about the implications of various procedure in order to allow our patients to make well-informed decisions about their health. *

Can Abdominoplasty Help Me?

This type of surgery is suitable for you if you suffer from excess skin following liposuction or some other form of extensive weight loss. It is not a weight loss method on its own, and cannot be performed until your weight is stable.

How Does Abdominoplasty Work?

This operation takes around two-to-three hours and is carried out under a general anaesthetic. It usually requires a one to two night stay in hospital, though lower abdominoplasty, or mini-tummy tucks, can be done in a day surgery.

An incision is made just above the groin crease, and excess fat and skin is removed. The remaining skin is pulled down and repositioned, repairing the incision.

This usually means that the navel must be repositioned and thus results in a scar around the navel.

How Quickly Do I Recover from Abdominoplasty?

While this surgery can have a profound impact on your appearance and self-esteem, the recovery time is significant. You will need to plan for a two to three night stay in hospital, and allow at least a fortnight to become fully mobile again.

Following this, you can expect it to take at least another four weeks for you to be able to do strenuous exercise.

There may well be a numb area between the scar and the naval caused by damage to the nerve supplying feeling to the abdomen. This generally disappears over 6-12 months, but may never fully recover.

There will also be a period of swelling above the horizontal scar which will improve over a period of three months as the lymph tissue establishes new channels of drainage.

For these reasons, this procedure should not be taken lightly. However, for many, the chance to finally rid themselves of the unsightly apron of skin makes this procedure an easy decision, despite the slow recovery.

What Are the After-Effects of Abdominoplasty?

When you wake up from the operation you will be lying with your knees bent and supported on pillows to prevent any stretching of the abdominal skin.

There may be a drainage tube coming out through the skin of your pubic area below the operation site. This will be left in place for about 24 hours to prevent any build-up of fluid.

It might be difficult and uncomfortable initially to stand up straight because of the tightness of the abdomen, but this will improve within a day or two.

Are There Any Risks?

An abdominoplasty is a major operation and should be respected as such.

As with any surgical procedure there is always a risk of infection, or the development of a collection of blood (haematoma) in the wound. In the unlikely event of this occurring, you will need to return to the operating theatre for the blood to be drained off.

This does not normally affect the result.

There is also the possible complication of the accumulation of lymph fluid (seroma) that may require repeated draining with a syringe over several weeks.

This procedure leaves a long horizontal scar running from hip to hip above the pubic area, which is generally low enough to be concealed by shorts or briefs, and a small circular scar around the navel. In particular, the central area of the horizontal scar is at risk of wound healing problems, which will require frequent dressing changes but eventually heal. Sometimes a minor scar correction under local anaesthetic is necessary to improve the end points of the scar.

Individual results may vary from person to person. Please click here to view our disclaimer.